Absolutely fell in love with this device Karen had me try out when trimming my summer dress fabric. Going back to ‘regular’ pinking scissors later this week for the rest of my fabric (cottons & rayons) is gonna be a trial. So…

I looked up Florian pinkers online and found the manufacturer here, and YouTube video (below).  There were also various examples for sale on etsy & ebay.

Not endorsing this, just saying I loved working with it because it not only holds & draws the fabric into the little cutting gizmos, but you also don’t get an uneven line because you never have to reposition the cutters. Video says they’re good for all weights of fabric, leather, and heavy crafting papers, too.

Not ready to purchase a new one, tho’.  Will wait until I spy a real 1930s version, as that’s my fav era. The company says they’ll refurbish a pair if they’re not working properly, or dulled. So if the price tag is right, I’ve got dibs!

Manufacturer does ship internationally, or lists dealers that will.

reverse side ~ stitched a bit

Remember it? Slow going, but I’m blaming it on the weather. (smug grin)

Snow on Monday and last week’s cold weather cooled my sewing ardor, pun intended. But I have managed to stay-stitch/zigzag all the edges, and am thinking about French seams when it warms up a bit.

Bulbs in the village are peeping out in exposed areas, as you can see below. 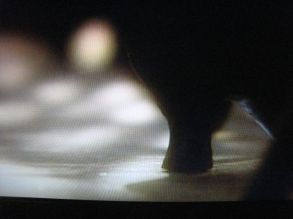 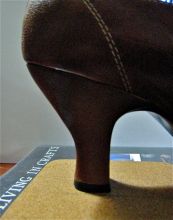 one of mine own humble versions

secretary from same Poiret ~ really, can this print be real???

I think it all stated while I was watching a recent (relatively) Poiret, “Cat Among the Pigeons.”  It begins with a close-up floor shot of a woman walking in a pair of what I call Spanish heels.

I absolutely a-d-o-r-e the shape.  And have several pair.  🙂

Later there was a scene with the new secretary.  Instant Pause while I went went gaga over the blouse fabric.  Can you be-ieve that print??? And it’s greeen, too.

Now fast forward to the discovery of that box of sewing goodies. It contained another rayon fabric that immediately reminded me of the Poiret blouse.

While not too much like the blouse fabric (read more normal), it is a greeny teal shade.  Just might get made into a similar blouse, once I locate a pattern.  Summer is a-comin’ in, so would want short sleeves, lowered, but still with a bow, neck. Now where have I seen just that pattern…

Picked this up as a remnant for very little dosh, and immediately cut it out. Then let it age for several months… a number of months. But we’ve all done that!  (Haven’t we?)

The rayon is what I’d call a medium weight, and I decided to try out the slip part of  Vogue 1103. Don’t remember why I thought of that at the time, but now am thinking nice little summer nightgown, or house dress.  Definitely too low to wear comfortably anywhere but in private. Tut-tut! The fabric irons beautifully, washes & feels ditto. Reminiscent of a 30’s pattern, don’cha think?

It was on the top of the excavated box from the other day, along with thread, and assorted other goodies.  Pressed all the wrinkled pattern pieces and fabric into loveliness, and realized everything’s cut on the bias. So it stretches, and doesn’t ravel.

Only 2 pattern pieces – front & back – and a few self-fabric bias strips for arms and neckline. Has 2 bust darts, which were designed out of clothes round about the 1980’s. In my book, that makes it retro. Guess I thought it might need a bit of elastic to fit properly, as I’ve made meself a note to use clear elastic if necessary.

Wouldn’t it look nice with red binding, though… but don’t have any, and am too busy to go out and get some!

This was cut out before I had my nifty pinking sheers, but that bias cut stopped the raveling, even with all the handling. Guess if I were really doing the right thing, I’d French seam the sides. But bias, at least this bias, stretches too easily. Am hoping this will be a quick and easy project.

Haven’t been able to get the dresses off my mind this week, watching the movie a second time just to be certain clothes were as good as I’d thought.  Alas, the film went back to the library, but there are photos available online I can share!

Hadn’t seen this particular Nick & Nora Charles mystery from 1945, and was captivated by Irene’s clothes for Myrna Loy.  Although Irene’s not credited on her Wiki page, she is in the film & on IMDB, and there’s a slideshow on the second.

In the above trailer on YouTube, I looove the suit & hat she’s wearing in the train scene! (#1 in slideshow)  See # 2 & 7 in this slideshow for adorable house dresses – as wearable today as they were then, tho’ I might scale the shoulder pads down a bit unless going to a 40s event.  Also  in the TNT scene below.

Decided to use the eyelash pocket from Folkwear #249, 1930s Day Dress, with button accent.  Thought the fabric would be too stiff for the little eyelash ruffle, but it’s just right.  The directions for the pattern were very clear and the 3 pieces went together very quickly.  The added weight of the braided ric rack at the hem adds just enough weight to make the fuller skirt feel more comfy in a breeze, and the lowered hem is now much more comfortable.

Bleached the fabric for the pockets for 2 hours, which toned down the colour enough so it doesn’t look too bad against the older skirt fabric.  That had been a major concern in this redesign.

I’ve been working on my closet… tossing out a lot of things and deciding what’s needed vs. wanted.  Tough, isn’t it?!

Got to the top plastic bag, with the gorgeous extravagant winter hat I’ve never worn… I started looking up how to care for it, how to clean/dust it… and that got me further interested.  But I’ve always loved hats!  So this has been more of a reintroduction and education.  Thus my raid on library books and web wanderings.

Hats have a very ancient tradition, which several books brought out.  Since that’s not my interest, I glanced through and got to more contemporary styles. It’s surprising how many styles used in the 20’s and 30’s are still used today.  The winter black hat is a cloche (French for bell), which adds to its cachet as far as I’m concerned.

I also love the veil, which I discovered is called Russian veiling, and always has the little squares & triangles.  It seems readily available, at least in black and white.

I realized the hat pin is genuine but alas, not vintage.  Silver’s not my color, so I’ll look for gold or brass (preferred).

Because I generally wear glasses, I’ve always been concerned about combining them with hats.  Seems as long as your eyebrows show sufficiently between glasses & brim, you’r fine.  Considering so many wear hats & sunglasses, don’t know why I worried, but I did…

Facial shape also affects which hat might or might not look suitable.  But there’s so much variety between shapes and proportions, and so many different acceptable “looks” that I’d leave it to the wearer to decide if s/he likes the hat in question.

I did learn the proper way to try on a hat – and you MUST try it on before purchasing!!!  With 2 hands, take the front & the back (generally the label is there) of the hat and slide it onto your head from forehead back.  That’s also the easiest on the coiffure.

But the important step is the second one: working the hat.  Move it backward, forward, tilt it slightly to either side.  You can even try in on backward! If something works, it works.  If not, keep trying on other hats.

The extra benefits of wearing hats, besides keeping warmer in winter and shadier in summer, are wonderful!  If you’ve not been a hat-wearer, I urge you to give it a go!

Momentary doubt as to whether “jabot” was reeealy the correct term to use in a previous post’s photo, so did a quick online search.  Yes, according to wiki here (lovely photo, isn’t it).  END_OF_DOCUMENT_TOKEN_TO_BE_REPLACED

Just love-love-love fashions from the ’30’s, and once I discovered Nabby’s blog, This Old Life, via We Sew Retro, I was in 7th Heaven.   At the beginning of the summer I started taking time to read older posts on both, and eventually got to one from Nabby about Miss Lemon’s sweater. That started everything.  END_OF_DOCUMENT_TOKEN_TO_BE_REPLACED