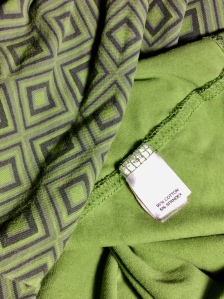 Over on the left is a photo of a much loved, 10+ year-old tunic (nightshirt? minidress?) I’d love to re-create. It’s never piled, feels absolutely wonderful, but has developed holes along strain areas—elbows and sleeve head, etc.

Last year I tried shortening the sleeves and adding a remnant, but the fabric just didn’t work. I couldn’t face making a new version, but I kept the original.

After resurrecting it again during Autumn’s Wardrobe Review & Grand Purge I thought again about recreating it. If only I could find a similar fabric. So the search began. 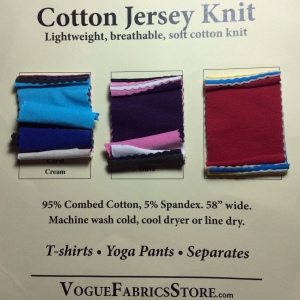 There’s no fashion fabric store nearby, so online is my only option. After searching a few sites, I got to Vogue Fabrics in Evanston, just outside Chicago.

After finding an option or three and procrastinating for weeks as we do, just to be sure, I finally tried to order swatches. Paypal seems to be permanently blocked, or their system can’t handle my having used two different emails over the years, so I called the store a couple of days later. 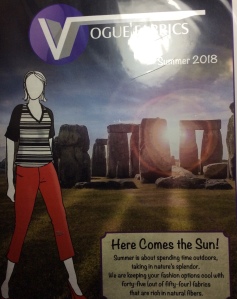 In talking with the office I realised they sell past copies of their seasonally-curated collections—$3 for over 40 swatches, some of which would be out of stock, but not the ones I wanted. And they also had a swatch card of all their combed cotton-Lycra knits (17 swatches for $5).

The downside was waiting a week before these were mailed, and 3 more days before receipt; however, no postage fee. If memory serves, they didn’t list a faster service unless I wanted to fly to Chicago & pick up in-store. Not! 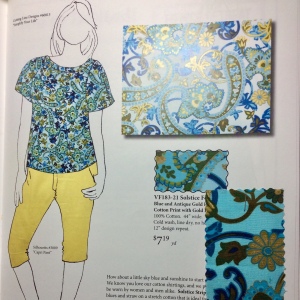 What else is new? Two full bags of donations waiting for a few more additions before being dropped off at Goodwill… Finished another great Louise Penny book and am in the middle of her A Rule Against Murder… A nice holiday on Thursday followed by a long holiday weekend, lots of wonderful fabrics to be grateful for and continue sewing, and some of the nicest sewing friends all over the world.

🍂 🦃 Happy Thanksgiving to everyone who celebrates this week, and Happy Week to those who don’t! 🦃 🍂

© 2007-2021 Cantanti~Solisti, CurlsnSkirls, and del’s other stuff. All Rights Reserved. If you’re viewing this post and it’s not in your Reader, it’s probably being used without permission. Please report misuse to us! Excerpts and links may be used, provided that full and clear credit is given, and URL links to the original post are included.
Loading Comments...