This is Version Two. The centre hole has two slightly smaller holes sort of north east of centre. See ’em? They’re not supposed to be there. 😩

Version one had the same problem, but the holes were bigger. 😣

After weeks of faffing about trying to avoid the inevitable I finally faced fact, and did what needed to be done. 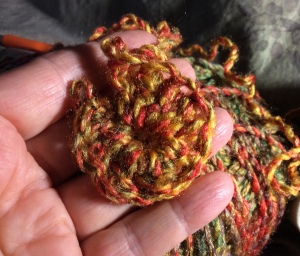 I was worried that the yarn would be too worn from all the ripping out sessions, but it seems to have held up, thank goodness.

Changing subjects, did a bit of reading over the last heat wave. . . 😅

Scott at Furrowed Middlebrow had just released nine more long-unavailable British women authors’ books. He’s been reviewing them on his blog since they were published August 5th.

So far I’ve read Spam Tomorrow (Verily Anderson, 1956), and totally cannot decide what to read next.

Spam was excellent, after a doubtful start. It’s autobiographical and starts in the English countryside before the war began in 1939.

Initially I was a bit put off by Anderson’s unconventional family, and didn’t know if I would enjoy the rest of the book, but I did. In fact, I was sorry there wasn’t another whole book to get us further into her experiences.

All of Scott’s volumes are published by Dean Street Press, under the Furrowed Middlebrow name, and are available in paperback or electronic copies via Amazon U.S. and U.K. I downloaded a copy to save shelf space, the environment and a little dosh (for more books 😉). I’m not affiliated with any of the above, and if I don’t like a book I’ll say so!

I’ve not decided what to read next, but am thinking about one of Carola Oman’s two books, Nothing to Report, or Somewhere in England. Has anybody read either of them?

2 thoughts on “remember this?”

© 2007-2021 Cantanti~Solisti, CurlsnSkirls, and del’s other stuff. All Rights Reserved. If you’re viewing this post and it’s not in your Reader, it’s probably being used without permission. Please report misuse to us! Excerpts and links may be used, provided that full and clear credit is given, and URL links to the original post are included.