Currently, ennui is winning, but hopefully not for much longer. Seen this past week ~

As comic relief to weather, world events, and general January doom & gloom I pulled out some old DVDs of comedy-dramas, this last being New Tricks.

The group was called UCOS (Unsolved Crimes and Open Case). For details I refer you to the first episode, which explains many of the on-going and humorous references.

I’m explaining this because an episode in the second year’s series (“Creative Problem Solving”) applies to sewing. In the video, its the framework for how the case gets solved. 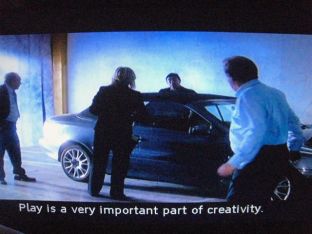 the men had been playing ball in an underground car park, when Sandra drove in. caption is Brian’s dialogue.

in another scene, Brian explains he’s not sleeping but “incubating”

We sewers don’t have old criminal cases to solve (I hope !), but we do sometimes have old creative problems to (re)solve: those pesky UFOs (unfinished objects) for one.

I’d also include some (many?) of the items hiding at the back of closets, in the bottom of drawers, and stashed away amongst out-of-season clothes.

(Please tell me I’m not the only one doing this!)

Which brings us to the photos below ~

See all that crinkly stuff in the first photo? That’s how my loosely wrapped & frogged ball of yarn looked as I started crocheting. When it came time to cut the remainder up for fringe I did get a little worried, and hoped I was remembering correctly that it would all straighten out once washed.

Fearlessly I washed everything. All went well.

(I think I owe this explanation to Felicia but I couldn’t for the life of me find her post, so my apologies. And apologies if it was someone else. Edited to add: It was Felicia – see her comment below.)

Am right chuffed to have re-purposed good wool into a more usable object, whilst also enjoying its softness running through my fingers during the reworking.

15 thoughts on “creativity vs. ennui”

© 2007-2021 Cantanti~Solisti, CurlsnSkirls, and del’s other stuff. All Rights Reserved. If you’re viewing this post and it’s not in your Reader, it’s probably being used without permission. Please report misuse to us! Excerpts and links may be used, provided that full and clear credit is given, and URL links to the original post are included.
Loading Comments...