Hadn’t posted a piccie of this completed Renfrew, so here it is!   😉 (Whoops! Sorry about forgetting the title.)

I’d cut off the sleeves and collars, then worn them around the house. The fabrics were great, but I didn’t quite know what else to do to them, so they went into stash.

Until Ali (aka Thimberlina) wore one of her Sorbettos … 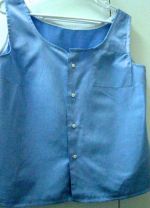 back of blue sorbetto

front of yellow sorbetto with no pocket in front

and the back, with button placket

These look rubbish on hangers (really did iron them!), but fit well, & pull on & off easily!

I was too involved to remember to take photos of either version, but here are some details.

Meanwhile, I had another man’s shirt . . . and decided to make its front the back on this version.

Am feeling fairly confident about the pattern, and have more versions in mind, including the 2 fabrics just in from England.

And I’m beginning to really appreciate being able to make up a pattern several times in succession, playing with it, and really getting the pattern to fit comfortably.

© 2007-2021 Cantanti~Solisti, CurlsnSkirls, and del’s other stuff. All Rights Reserved. If you’re viewing this post and it’s not in your Reader, it’s probably being used without permission. Please report misuse to us! Excerpts and links may be used, provided that full and clear credit is given, and URL links to the original post are included.